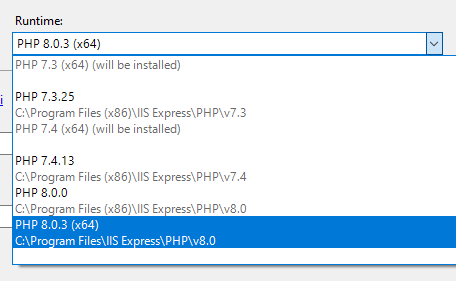 Let's take a look on the April's news and updates for PHP Tools in Microsoft Visual Studio.

The selected PHP will get automatically downloaded and installed upon running the project. The automatic installation handles the necessary debugging extension Xdebug, configures it, or installs an update if necessary.

The PHP editor got a few more code actions available in the form of a light bulb or a smart tag in older versions of Visual Studio. Use the context menu or a shortcut ctrl+, to open and apply an available action.

There are a lot new improvements in the PHP debugging experience. Now it handles fatal errors in the code better, showing the corresponding stack trace and navigating to the affected line of code in the editor. During the debug session, user will also get more information in the Visual Studio's Output pane. This should help with diagnosing and fixing issues with the debugging itself.

There are a few more diagnostics reported live in your code. With the spread of the PHP version 8, there are more projects that stopped working. One of the causes is the use curly braces as array indexers. PHP editor now reports the use of curly braces as an array indexer, in case the language level is set to 8.0 or higher (in the future).

A lot of new functions got added to PHP 8, and a lot of functions have been deprecated. PHP editor now reports use of deprecated or not available methods as warnings.

The Test Explorer has been updated as well. Now it scans the entire solution and lists all the PHPUnit configurations (except for test configuration in vendor folder). All the available tests get sorted and organized by available groups.

The feature allows to run and debug the tests, it remembers the previous tests results and displays them visually, including the test log, test output, and test duration.

Since the April's update, this feature also works with the new Open Folder feature in Visual Studio 2019, so users don't have to create a project for their PHP application.