Laravel on WSL and VS Code 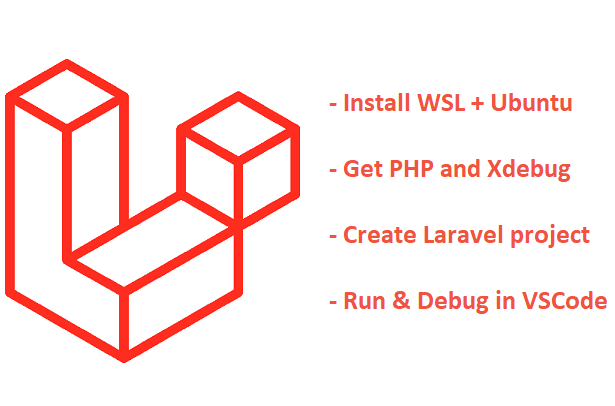 Visual Studio Code and Windows Subsystem for Linux (WSL): those represent a great couple for developing a PHP application such as Laravel inside a virtual Linux environment. This tutorial describes installation of WSL (version 2) on Windows 10, setting up PHP with debugging capabilities in there, creating a Laravel project, and getting your VS Code ready to debug the PHP project in WSL.

For the complete documentation of WSL, visit docs.microsoft.com.

Before you begin, ensure your computer has a CPU Virtualization support enabled in your BIOS. Sometimes it is disabled by default.

Make sure you have installed the following Windows Features: 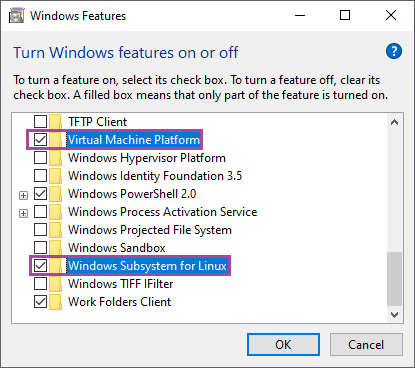 You can install them either from the Turn Windows features on or off control panel (as depicted on the screenshot above), or using the following PowerShell (opened as Administrator) commands:

After installing the features, restart your computer.

And finally, open PowerShell and set your WSL version to 2 by default:

Using WSL version 2 may be optional, but I've encountered a few issues with just WSL 1. 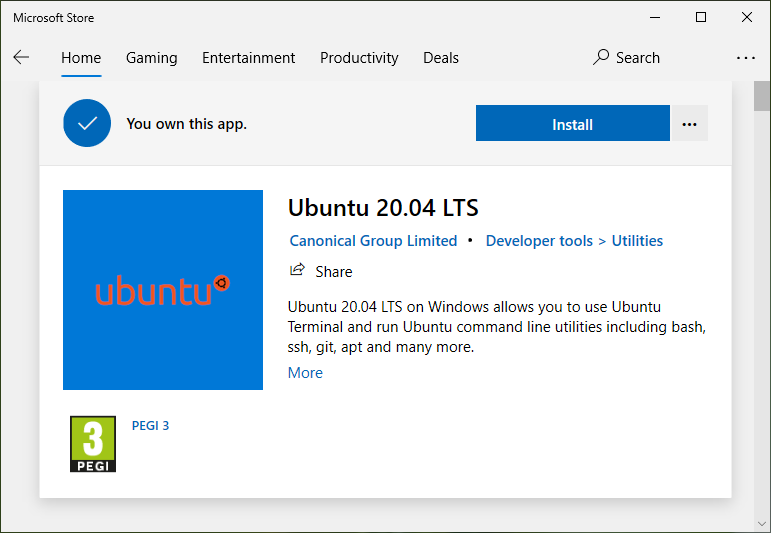 After installing the container, Launch the application. A new terminal window will appear, finishing initialization and waiting for you to fill in a new user name and password.

Prepare your VS Code

Visual Studio Code is a powerful editor for developers. One of its features is that you can develop projects on a remote machine (in our case in a WSL container). To develop PHP code on WSL, install at least those two extensions: 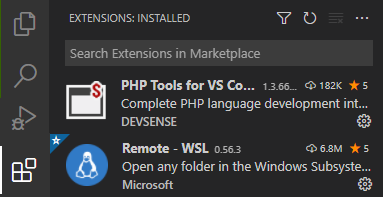 Now you have VSCode, WSL, and Ubuntu installed and ready. Connect the VSCode to the your Ubuntu container. Press F1 to bring the command palette, and run the command Remote-WSL: New WSL Windows using Distro...,

A new VSCode window will open. From now on, the VSCode workspace is actually your user folder in the virtual environment, and all the commands and all the code run in Linux. To complete the setup of VSCode on Ubuntu, explicitly install VSCode extensions in WSL: 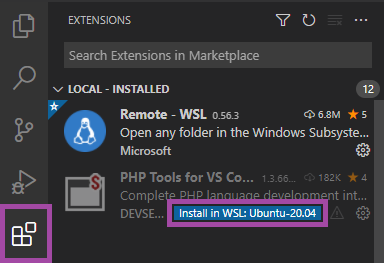 The last step is to open VSCode terminal (Ctrl+`) and start typing commands ...

In the terminal window, enter the following two commands - to update the apt cache and install PHP with a set of extensions, including Xdebug!

You can verify the installation by running the PHP command php -version:

To create a new Laravel project, it will be useful to have Composer tool installed globally. Follow the official instructions to download and install the tool in your Ubuntu container, and move the tool to global path:

Now we are ready to create some PHP, edit it, run and debug the code, etc. In this part, we'll create a new default Laravel project using Composer.

This command effectively creates a sub-folder example-app containing the entire Laravel and a default empty project in it. You might notice, VSCode has still no folder opened. Click Open Folder and choose example-app from the list.

Now you're working inside the container's example-app folder, PHP Tools extension activates for the first time, downloads an additional dependencies, and you're ready to setup run & debug. 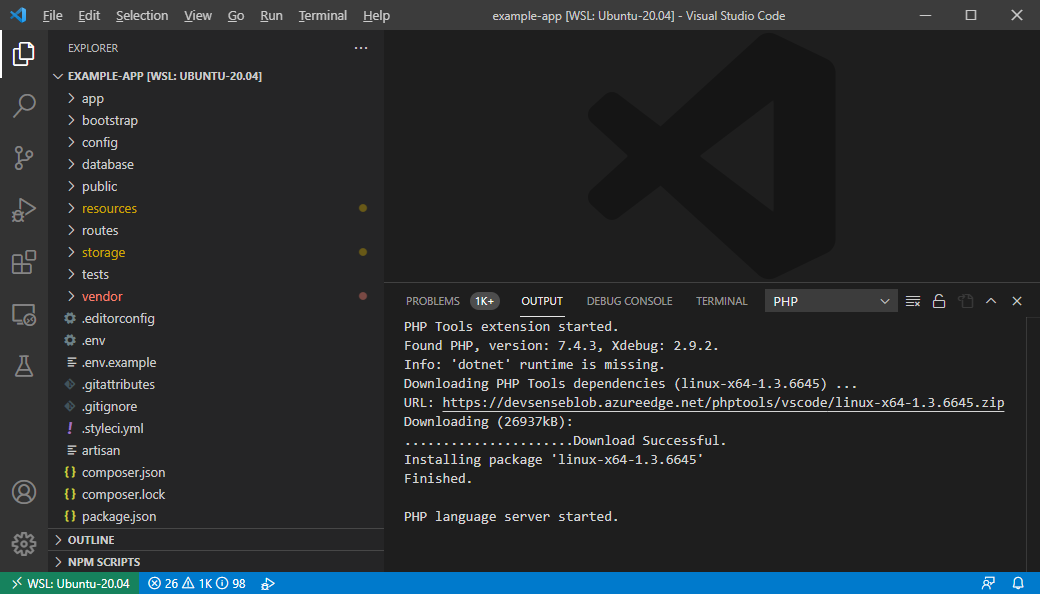 You'll get reported several problems in vendor sub-folder as there are known typos and mismatches in original PHPDoc comments. Go to VSCode's settings.json file (File / Preferences / Settings, search for php problems, and click Edit in settings.json). Copy the following json in there:

PHP Tools will serve as a built-in server, debugger, and editor, all in one. Create launch configuration for the Laravel as described below, and run the project. 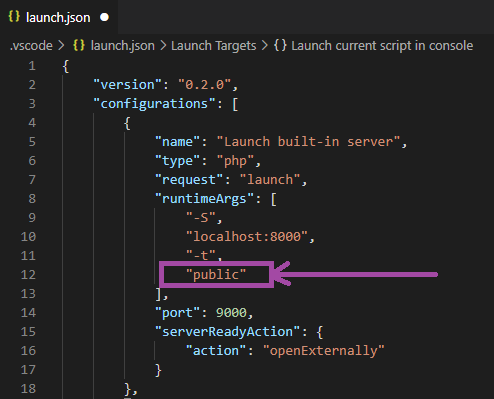 In the newly create file, change argument "." to "public", as Laravel expects the root of the server to be the ./public sub-folder. Optionally, you can change the web server port number in here as well (change localhost:8000).

Press F5 (Run / Start Debugging) to start the built-in web server and initiate debug. You'll get welcomed by a first (handled) exception which is normal. The debugger is just set, by default, to break on any error or exception, even it is handled. 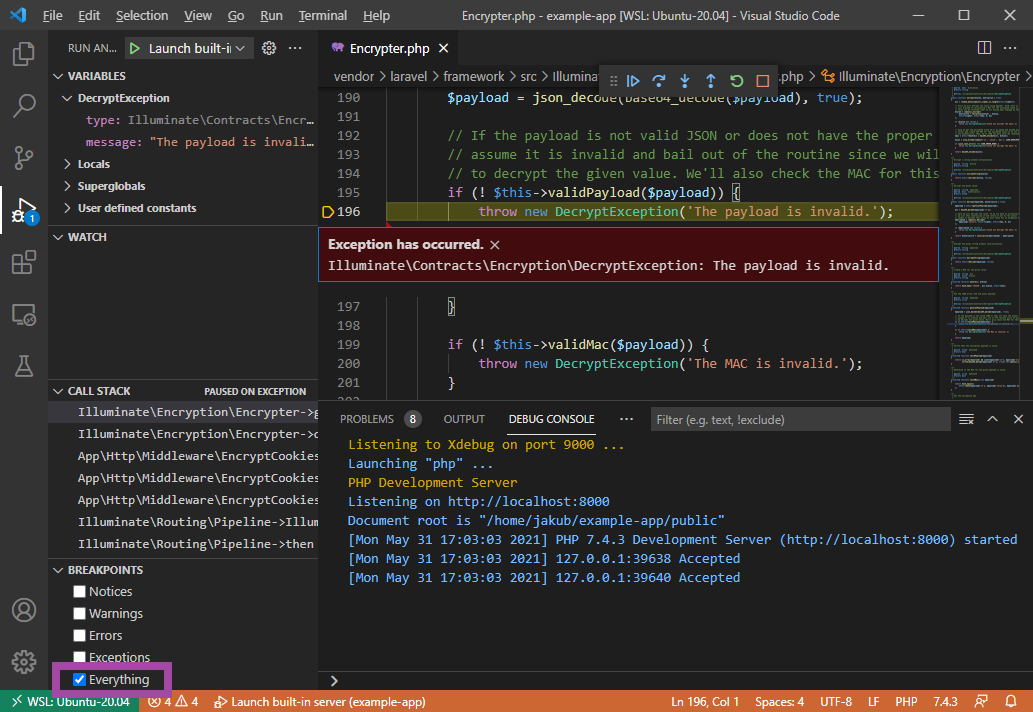 Uncheck Everything, and check Errors only if you wish.