Compound Launch and Debug in VS Code

Very often a PHP project consists of several separately hosted applications, such as a public website and some API. In case developer wants to run and debug his set of applications locally, there is a very useful feature in VS Code called compound launch.

For the purposes of this tutorial, we have two PHP applications. One is an imaginary frontend, in a subfolder "./public". The second one is a backend API in a subfolder "./api". Frontend needs API, and the developer needs to debug both of them at the same time. Both the applications are supposed to be hosted on a different URL.

But what if we'd like to not configure the web server, simplify things a bit, and take advantage of the IDE and PHP's built-in web server (also called development server)? All the necessary configuration would be within the VS Code workspace, and developer would start and stop the project from within his development environment.

VS Code is well equipped for launching two or more launch configurations at once. But does it work with PHP and its debugging extension?

Open a folder or a workspace with our two applications in VS Code first:

We either already have .vscode/launch.json file, or we have to create a default one for PHP.

Let's open the default .vscode/launch.json file. This file tells VS Code what's supposed to be started upon running the project (F5). it also allows to define more than one configuration. In the screenshot below there is the default Launch built-in server configuration. 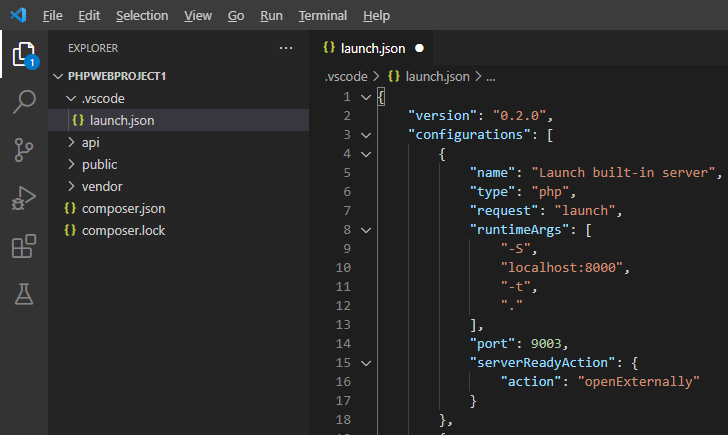 The default Launch built-in server starts a development web server on localhost:8000, listening for Xdebug on 9003, assuming the web root is at "." which is the root of our workspace. This is not what we want.

.vscode/launch.json with the default launch configuration:

Instead, we want to define two development servers! - Launch Public and Launch API.

Notice, we have omitted the "port" setting. This value forces VSCode to listen on incoming Xdebug (or DBGp) connection. Since we have two configurations run simultaneously, we can't listen on the same port twice. We can either specify two different ports, or omit the setting completely, so PHP Tools will find an available port automatically.

Note: Another set of ports is the 8000 and 8002; those are web server ports and has to be specified. In case we have our own web server (such as Apache, IIS, a remote server, or a docker container), we would use a different configuration "type". Although, then we don't need two configurations at all. Instead we would use "Listen for Xdebug" configuration which is already there in the default launch.json file.

At this point, there are two configurations which can be run separately: 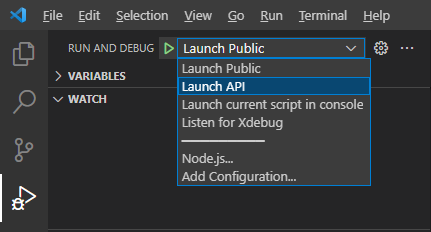 Thanks to the automatic port setting they will work together at the same time. The final step is to define a single launch configuration that will run and stop both of the servers with debugging upon pressing F5 (or upon Run command).

This will be the compound launch called "Public + API", which runs both of the servers with debugging, and stops both of them when we terminate the debugging session: 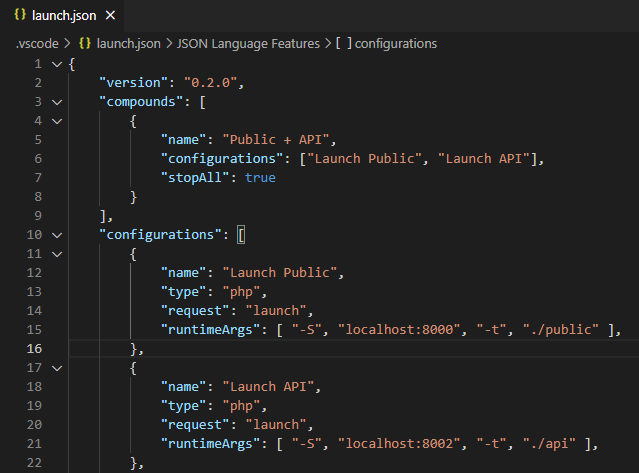 This is how it looks like if we put it all together: