Using PHPDoc With PHP 7 - And Actually Making it Work 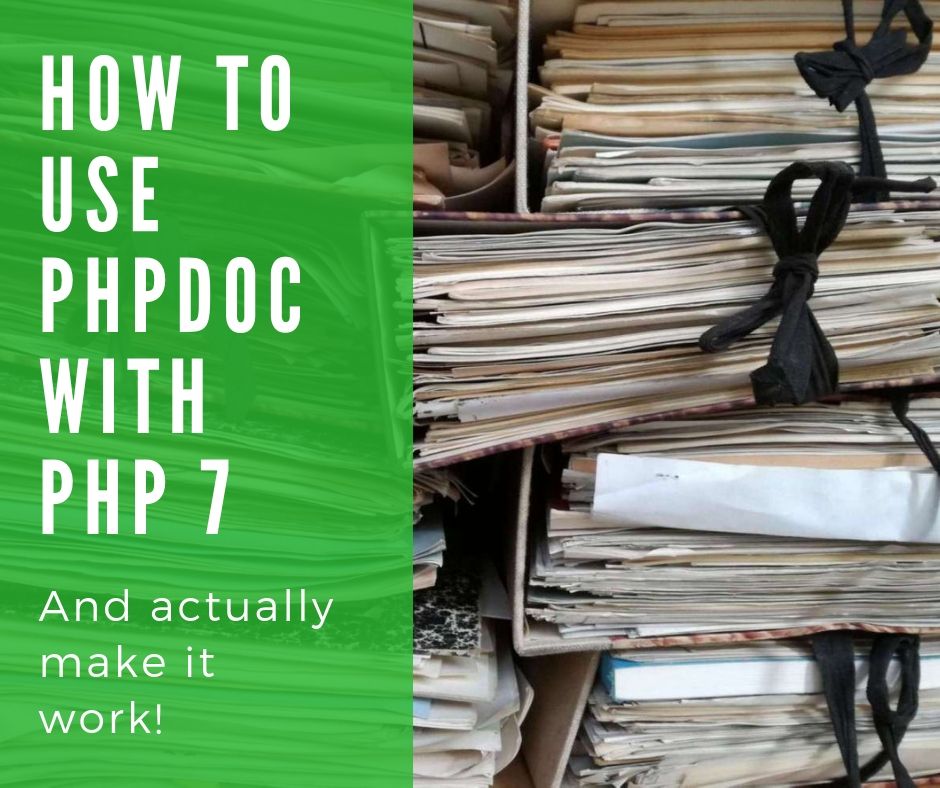 If you've been developing for any length longer than about 5 minutes, there's a good chance that someone has told you about the importance of properly documenting your code. And like a good person who doesn't want to make babies cry, I know you want to make all of the comments in your code that it needs, so the world will understand your masterpiece.

But commenting code isn't enough. With PHPTools they can hover over function calls and see a synopsis of the function call. Like so:

But - it's a little annoying making people crawl all over your code to find the functions being used, and then go back to coding. What if there was a tool that could take all of the documented comments in the code, collect them into HTML pages with links between the methods and detailed explanations of what each class, method, and variable does? Could such a tool exist?

Well. Yes, it does. It's called PHPDocumentor, or PHPDoc for short.

PHPDocumentor - known as PHPDoc for short - has become the "de facto" documentation system for PHP. It's really a PHP based program - using the concept of "eat your own dog food"* school of software development.

* "Eating your own dog food" does not mean a bad thing. It means using your own software to achieve your goals. Developers should eat their own dog food when possible, so they have the same experiences as their users.

What PHPDocumentor does is read through a directory of PHP code, looks for PHP files, and extracts comments with special formatting. Here's a typical example:

These PHPDoc formatted comments are translated into HTML, creating documentation that explains what each class, function, or variable does without people having to read through the entire code. They can use the PHPDoc HTML pages to quickly see how the software works, what the functions use for variables, what the function returns, or other useful bits of information that the developer decided was important.

PHPDoc does not generate comments and documentation for you -you still have to type in the details. But it can collect those comments for you, and PHPTools makes it even easier.

PHPDocumentor can be installed either through PEAR, PHAR, or composer. But - the default PHPDocumentor is geared for PHP5. If you're running PHP7, you'll run into problems such as differences in how arrays work or other little issues if you use the standard PEAR method. So, first rule - if you're going to use PHP7, don't install PHPDocumentor with PEAR.

Instead, check out PHPDocumentor2 available at https://github.com/phpDocumentor/phpDocumentor2 - this is made to be PHP7 compliant. There are some gotchas on how to set it up, so this is one that works well for UNIX and Mac based systems through this process:

Don't go running it right now if you don't have PHP files to document - you'll have a disappointing experience because nothing will happen. If you want to use PHPDoc, first you'll have to create some PHPDoc documentation in your PHP files.

PHPDoc can do most everything by itself, but if you want to have some pretty pictures to go with it, having https://www.graphviz.org/ installed it a plus. It's not required, but if PHPDoc can't find it, it'll give you a warning that it would be really, really helpful. Notice that it has to be available to PHPDoc, so it should be in your path statement. For those running Mac, it can be installed via Homebrew with:

PHPDoc comments always proceed what they are describing. This can be a function, a class, constant - the complete list is here:

Take our previous example, It comes right before a function, like so:

Let's go back to our example, and elaborate on it a little. It's describing a function called ReturnMessage that takes two parameters - $status and $message. But we want the user to know some more, like what the function returns, who write it, and the version. If you're using PHPTools, just typing the @ symbol within a PHPDoc comment brings up a list of tags. Like so:

One of the cool things is if you're using PHPTools and enter a tag, you can just press Tab to go through the various options. Saves some time.

Now we have our PHPDoc comments, let's make our document.

Now that your developers have added in all of the PHPDoc based comments (perhaps assisted with a talented and may we even say - good looking technical writer to assist), let's actually generate our PHPDoc.

From the command line, we navigate to the directory with all of our PHP files and run:

Depending on what operating system you're running, this is usually enough. I've found it's better to at least run:

The -d . parameter means "use the current directory to scan for PHP files to create the documentation." Here's some other useful options:

If we're running just the generic version, the PHPDoc files will be placed in the build directory. Here's a breakdown of the files PHPDoc creates based on our example:

Phew - that's a lot of stuff, and most of it is default. The most important thing to note would be the file docs/index.html. Open that up with any standard browser and you'll see all of that lovely documentation. Here's what we see if we go into our class Customer: I cannot stress how important good documentation is for your projects. It helps not only other people, but yourself so when you start pouring through your code to find errors, you can find the path of your logic. PHPDoc can help you, your clients, or your fellow developers quickly see how the code works so they can get back to work.

PHP with Nginx on Docker